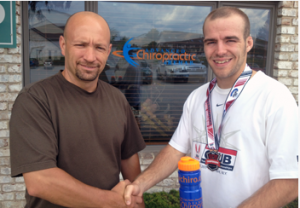 Mannozzi is a Youngstown native and a 2005 graduate of Boardman High School. He was inspired by his father, who had multiple sclerosis, and could not walk the last 14 years of his life, and his sister, who died of cerebral palsy and never was able to walk. He began Race walking in March of 2008 immediately following his college wrestling season. His goal of reaching the Olympic Games was born. With hard work and dedication, he became known as an outstanding competitive walker.

Michael is committed to work towards qualifying in the 50k Race-walk. His weekly training schedule consists of one long distance walk or two 2 speed walks, at times one extremely tough workout is used. One or two tempo workouts, and a couple of recovery (mileage building) days. Biking and running are often included in his weekly schedule.

Mannozzi says, “Advanced Chiropractic has helped by diagnosing and helping improve parts of my body that I was experiencing problems with, this has varied from massage, stem and working on flexibility. I look forward to seeing improvements as a direct result of this treatment!”

“I look forward to helping Michael achieve his goal.” Dr. Lyons of Advanced Chiropractic says “By working with him weekly we can help to reduce stress injuries, and improve muscle healing giving him more opportunity to train.”

Mannozzi rates his performance in two ways:
Personally – “Over the years, there have been many obstacles to overcome. There have been times when I had little hope, but my faith in God has carried me every step of the way. With my father and sister’s lives in focus, I feel blessed to become one of the most successful USA track athletes in my sport. I have experienced success in athletics and in life, which at other times, were only dreams of mine.”
Olympic pursuit – “I need to improve my times if I ever want to be in the mix for making a World Championship or Olympic Team. The good news is that I have time on my side. I have the opportunity to qualify for the 50k Olympic Trials in either 2014 or 2015, and for the 20k in 2015-16. I will aim to qualify for multiple USA teams between these qualifying events, in order to gain international experience and to improve. I hope to compete in the World Cup of Racewalking in 2014, the 2015 Pan AM Games in Toronto, the Pan AM Racewalking Cup in 2015 and perhaps the World Championships.”

Mannozzi is associated with The Shore Athletic Club (the USA Track and Field Associated Club out of New Jersey), the New Albany Walking Club, The Youngstown Road Runners Club, and as an Elite Athlete in the Achilles Running Shop Race Team.